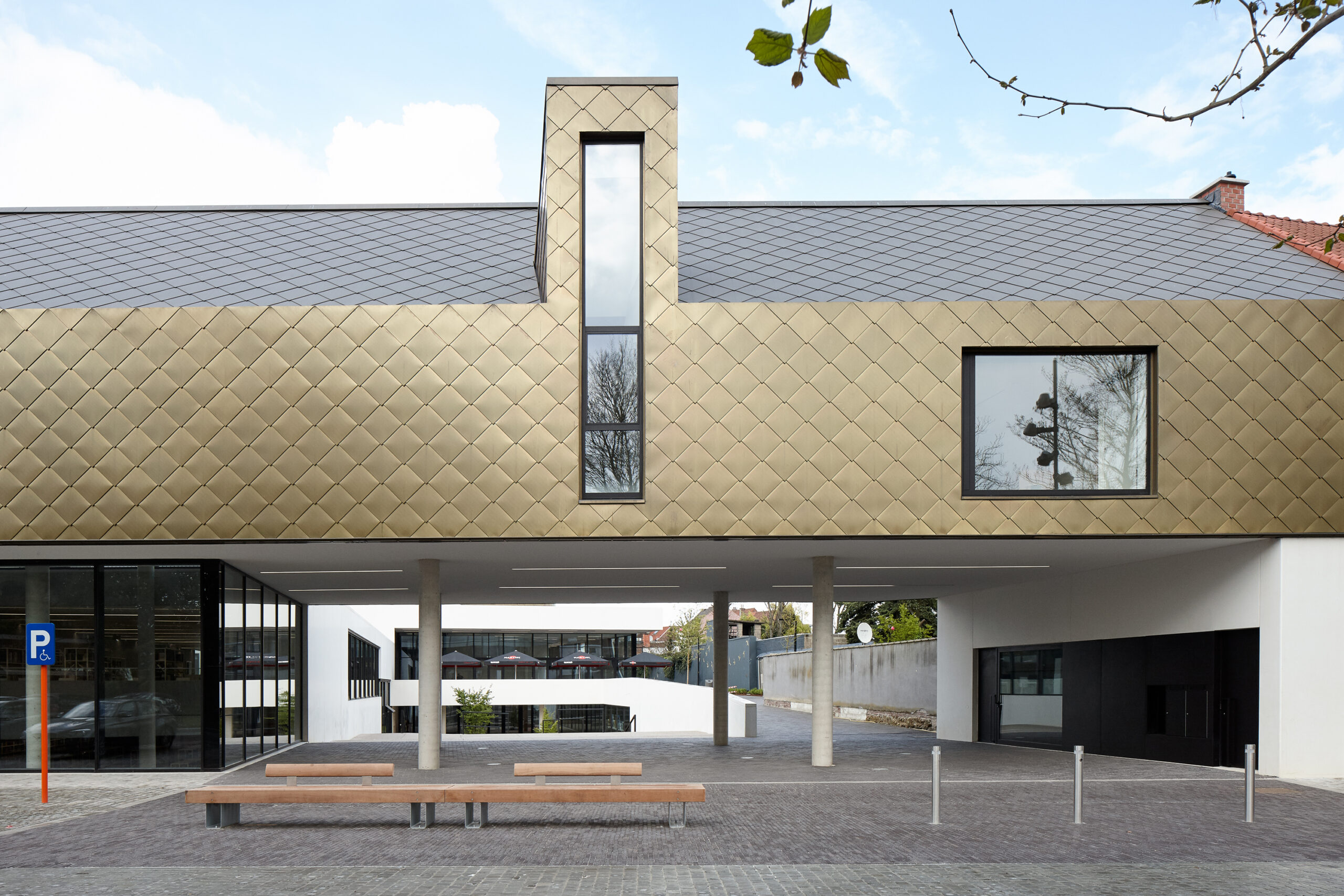 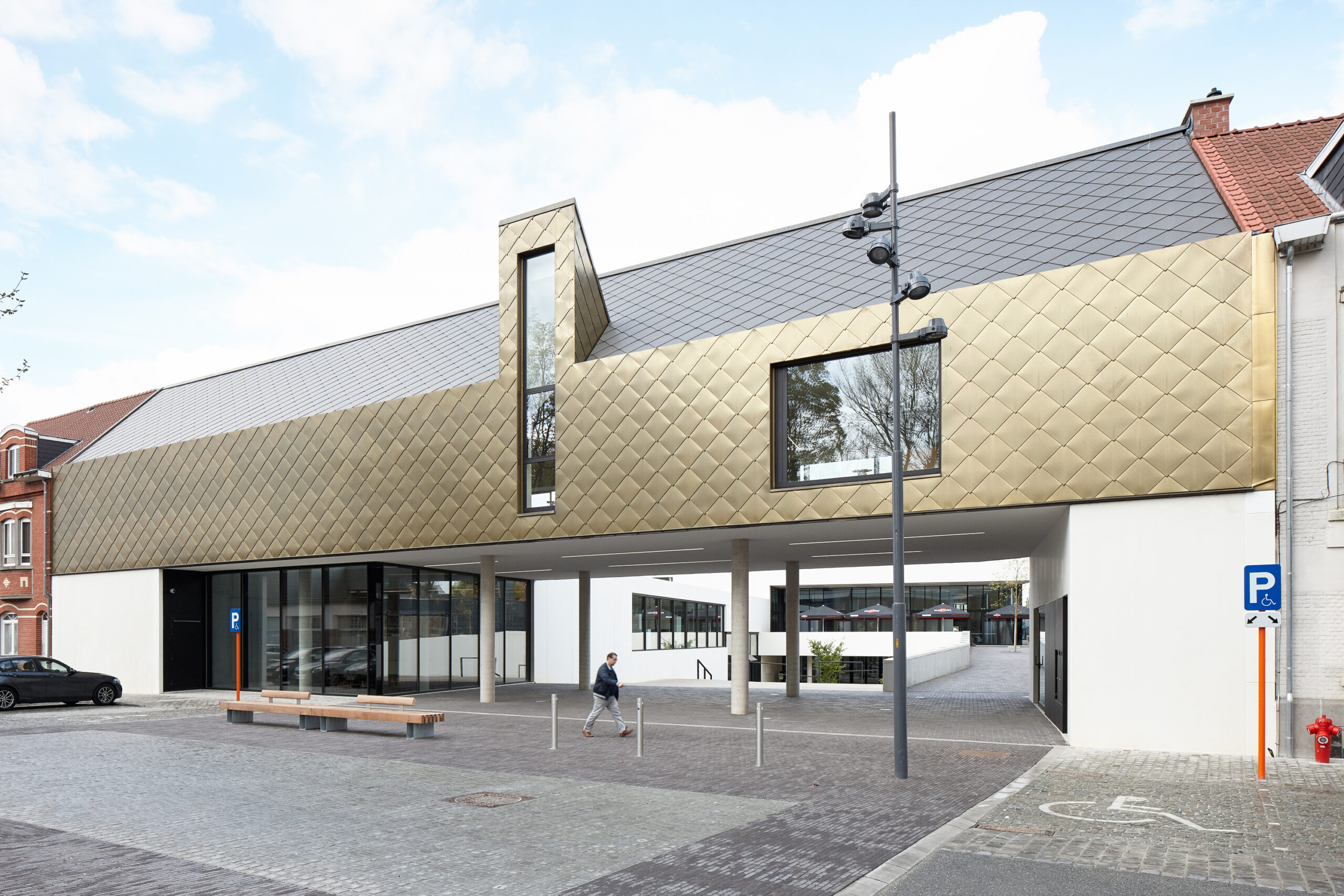 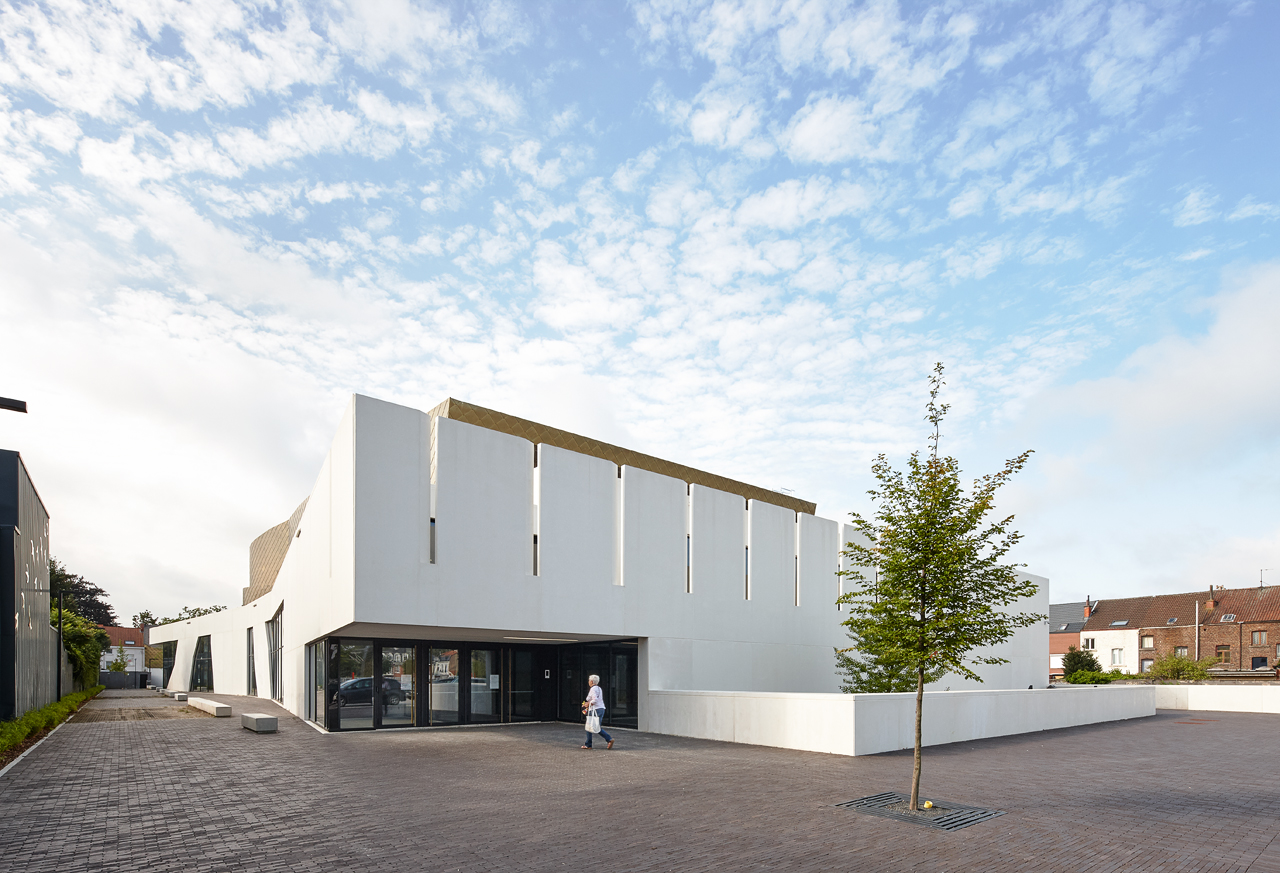 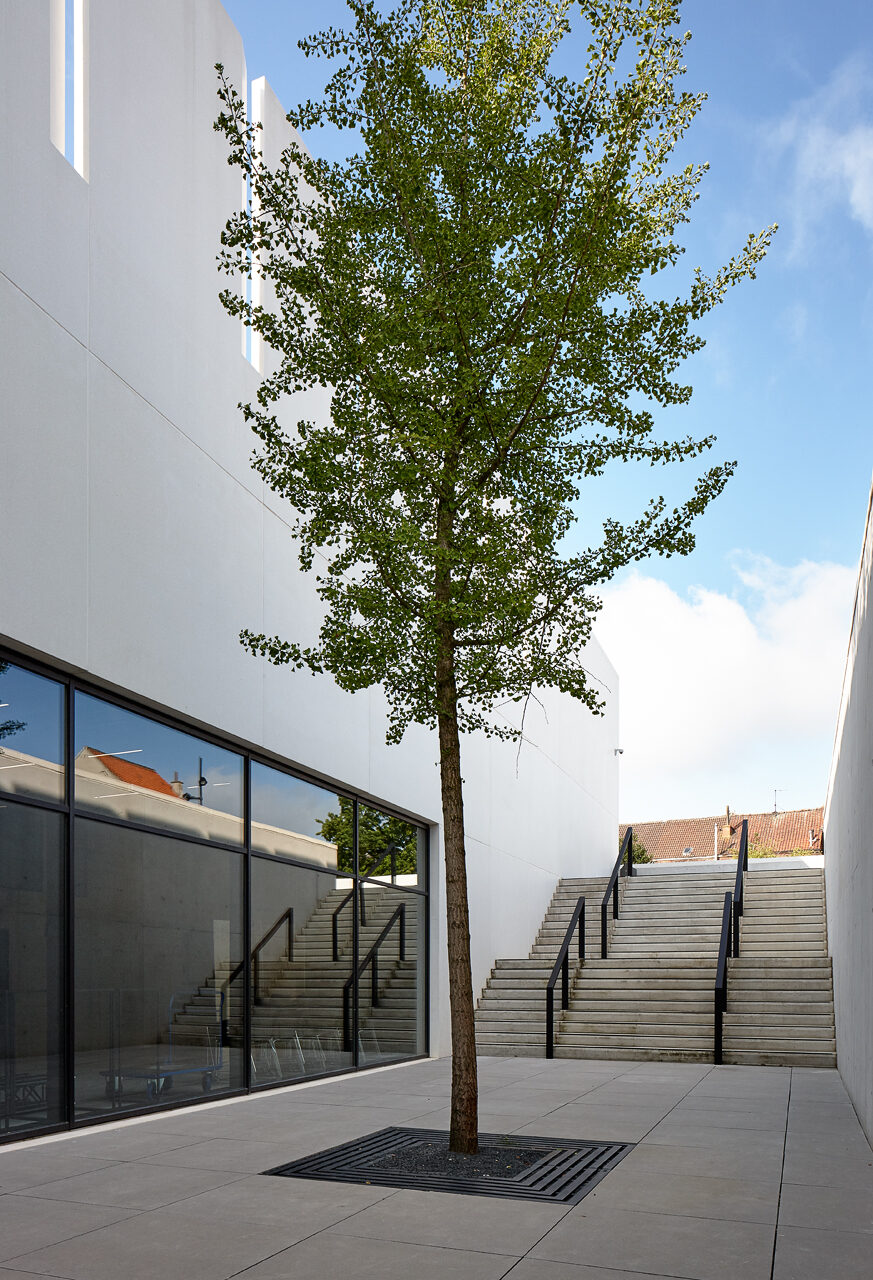 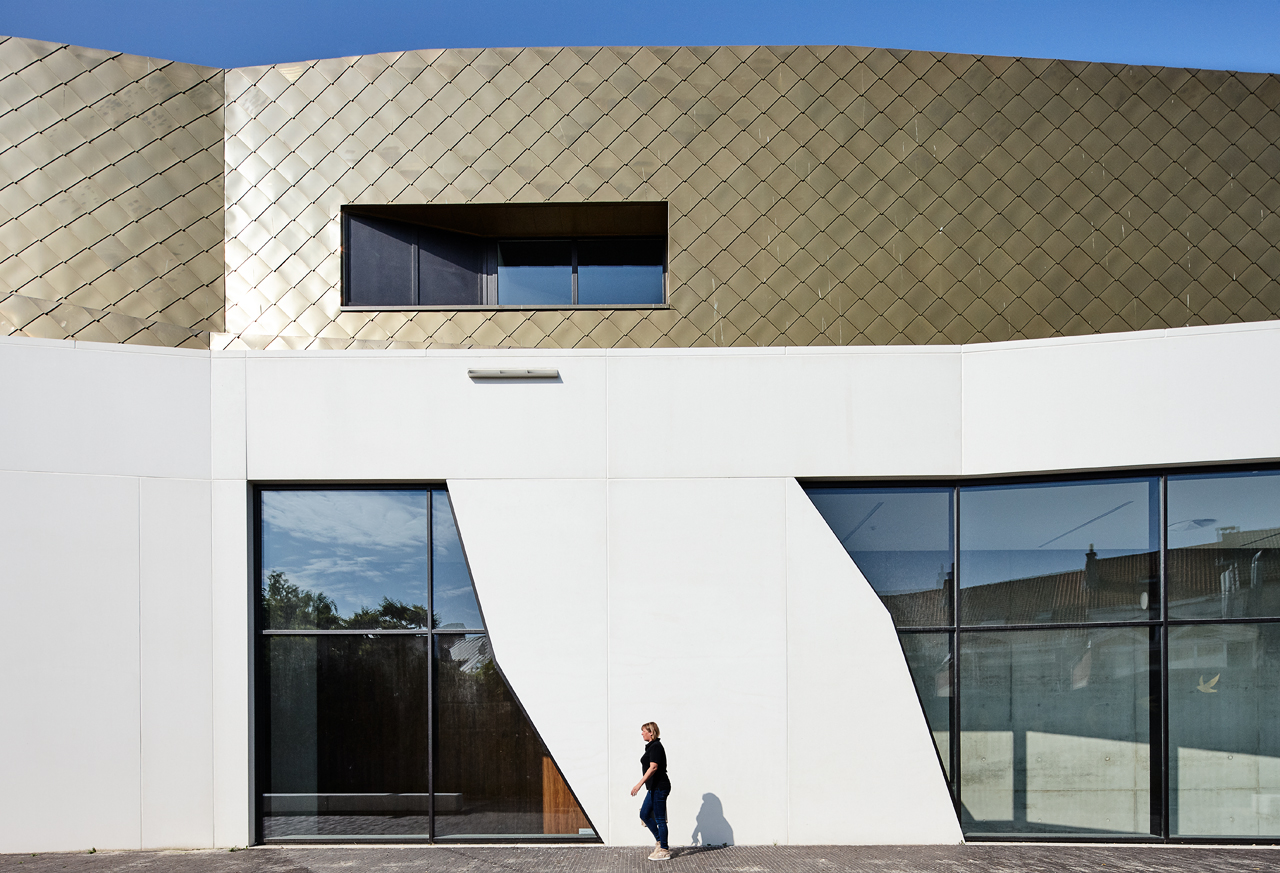 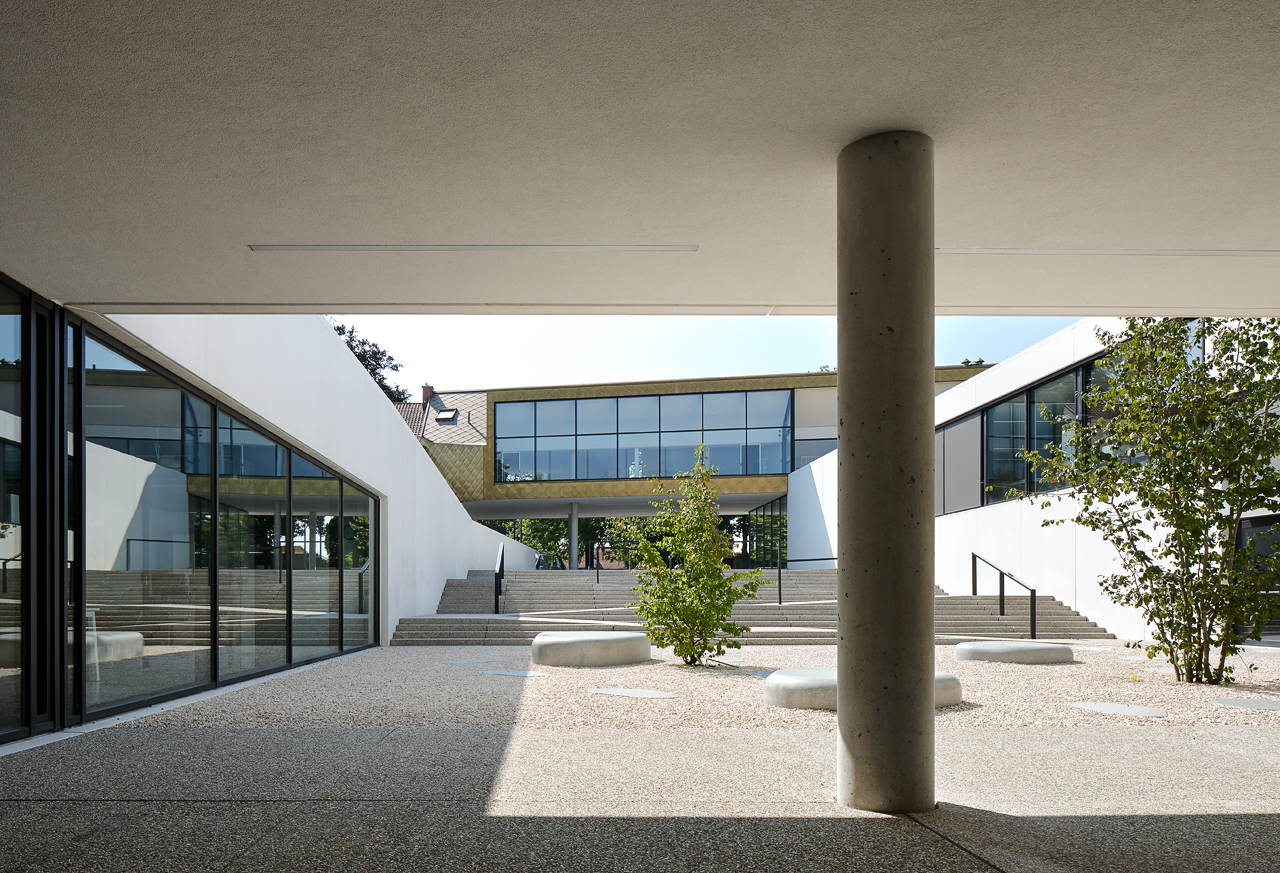 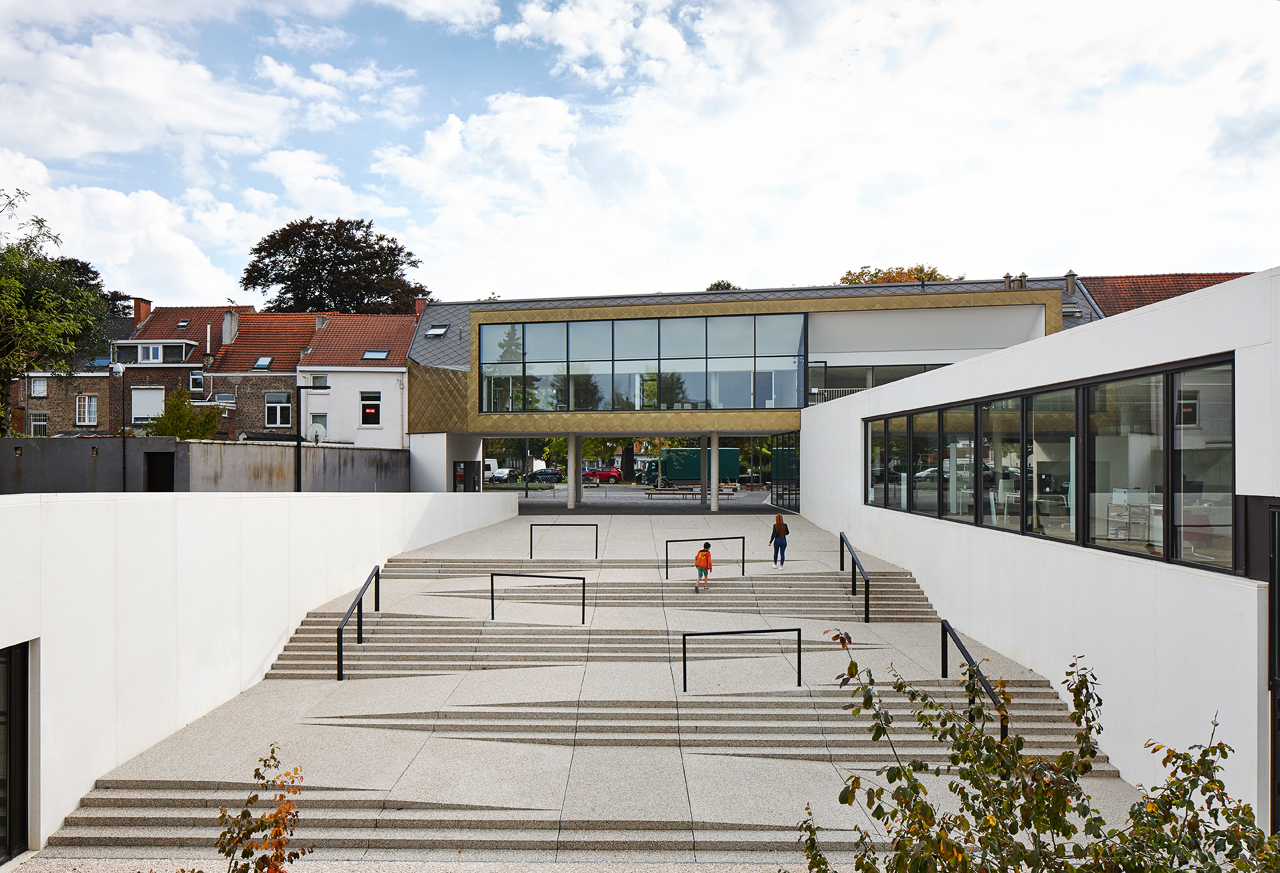 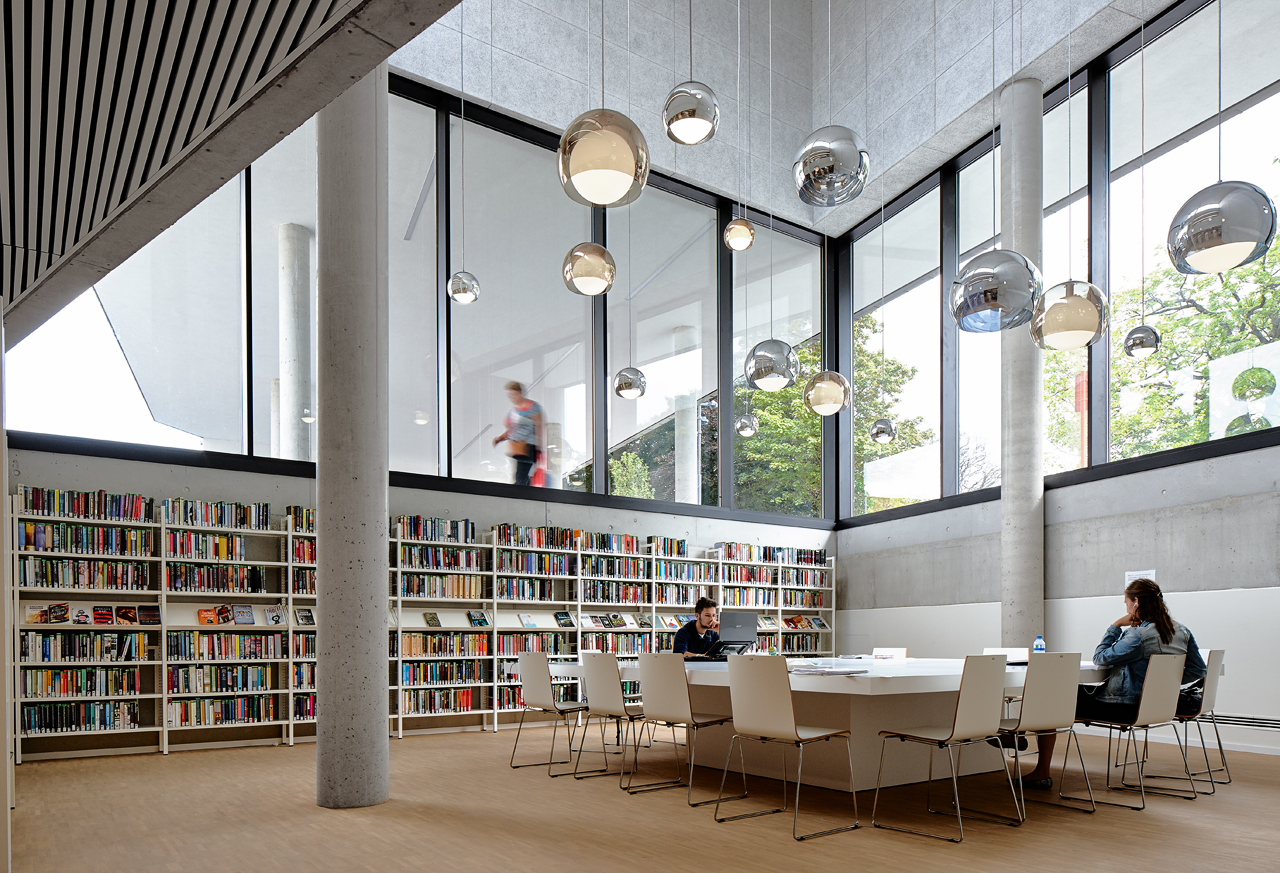 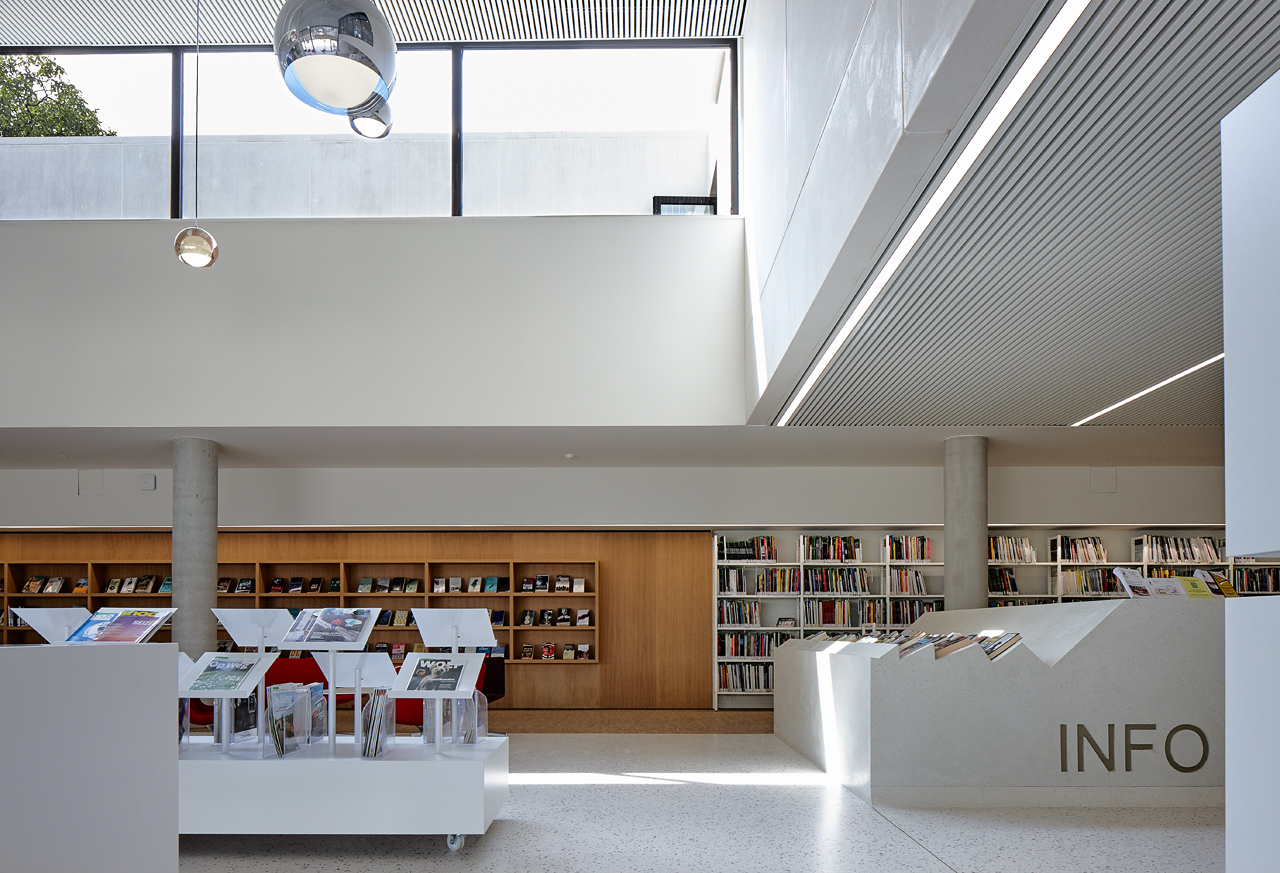 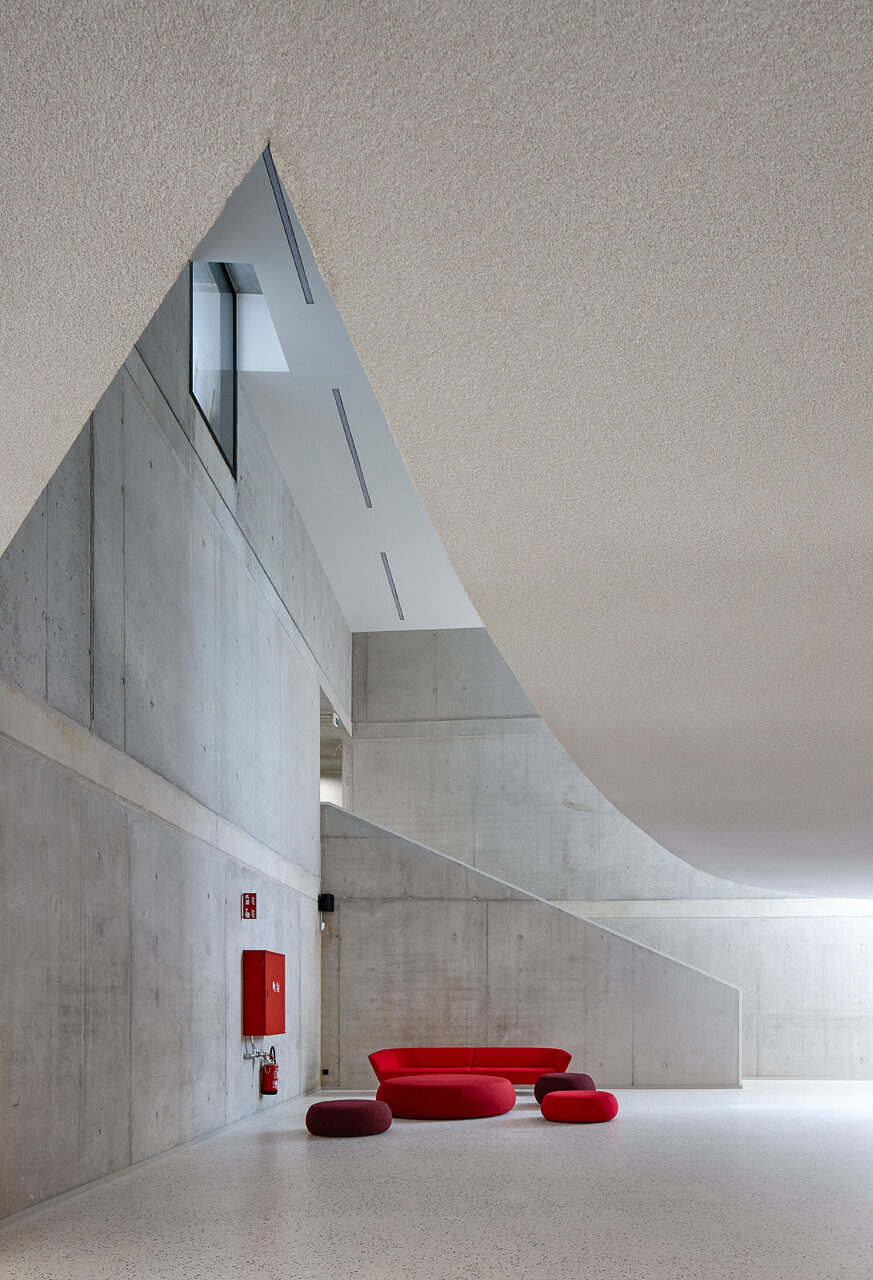 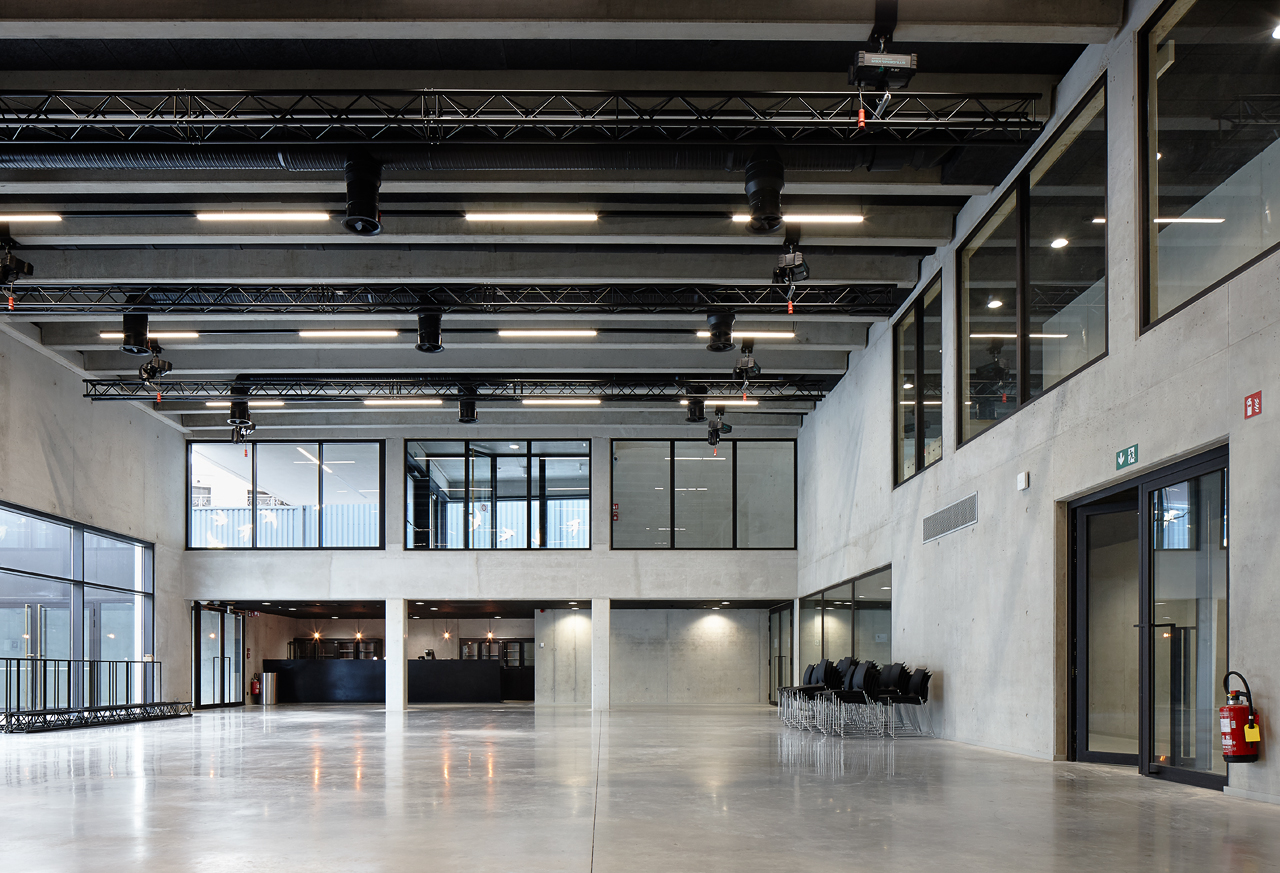 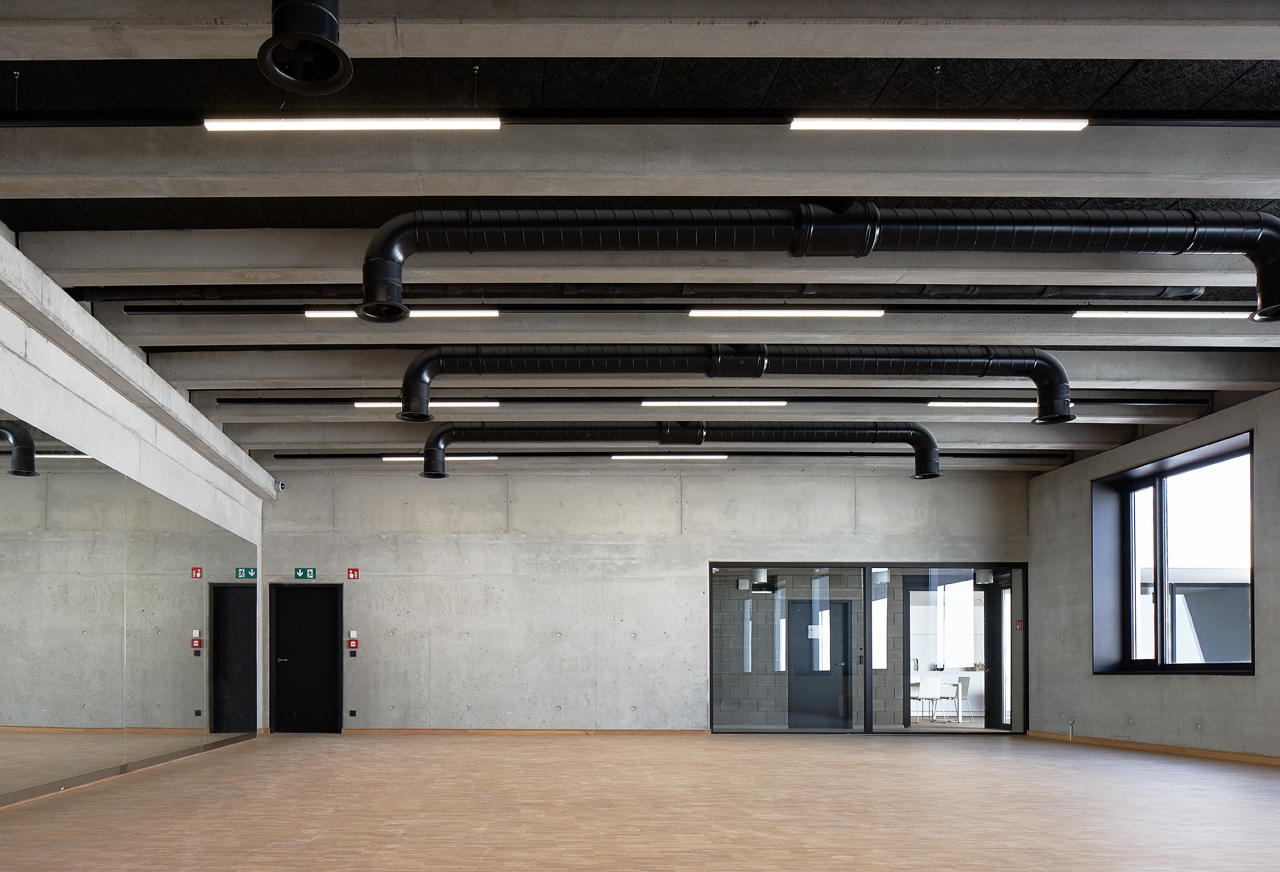 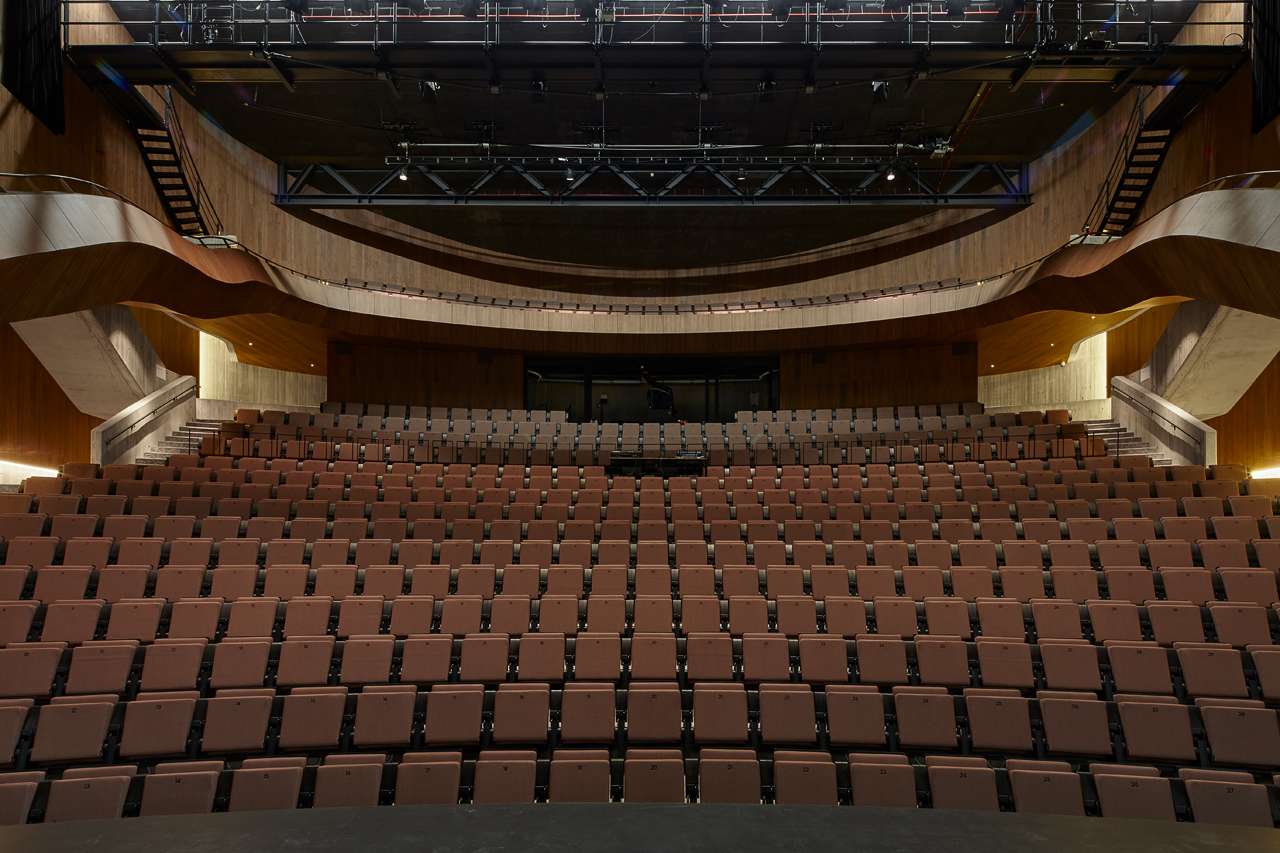 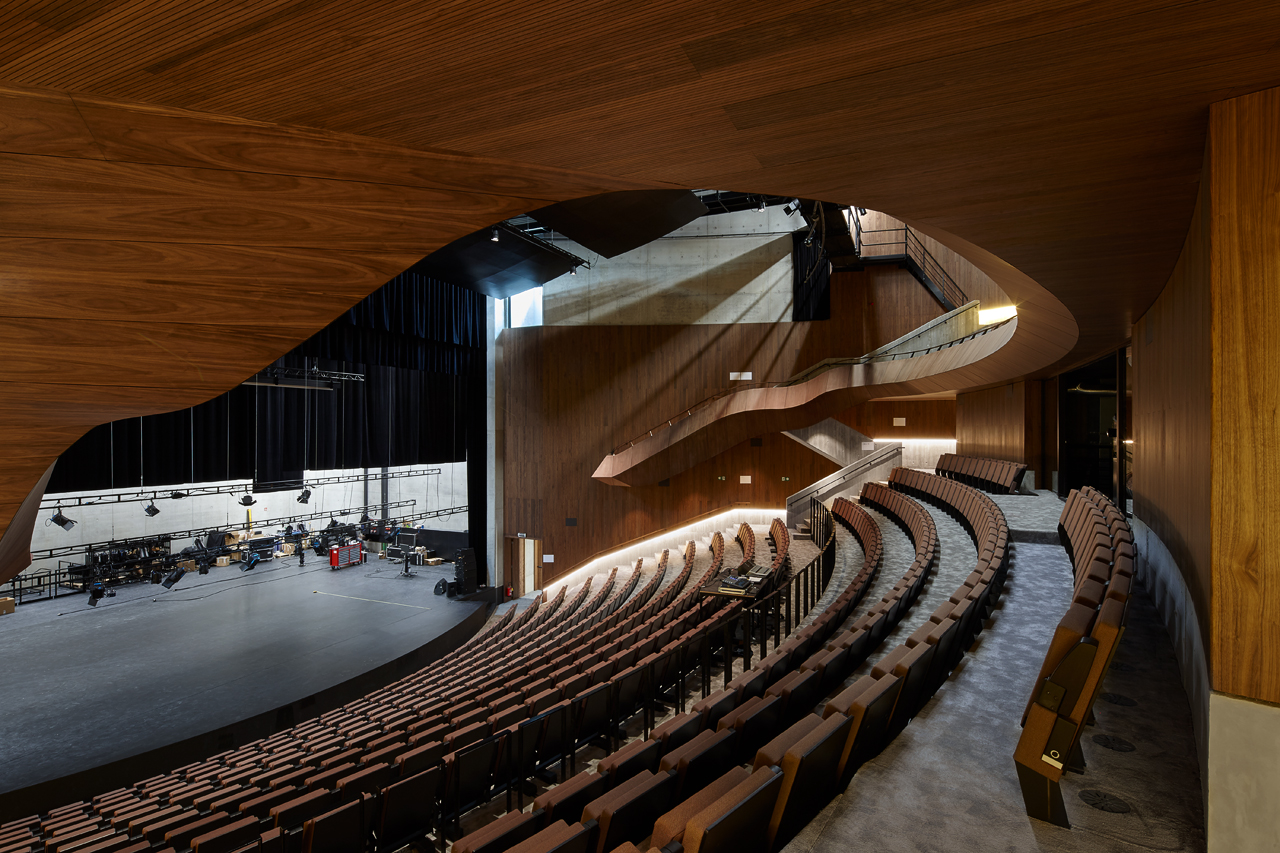 The ‘Suchard’ site is an extended area situated between the rear sides of the shops in the Stationsstraat and the dwellings in the Seliersstraat on the one hand, and by the railway on the other hand. The site is subject to a strict BPA. The development of this site means a real socio-cultural injection for the village centre. The presence of the academy in its green surroundings expands and feeds this site. It will become the green anchor point towards the village centre.

Taking into consideration the vibration measurements of the railway, the theatre hall (700 seats) is planned at a minimum distance of 60 metres from the railway. Not only because of the regulations on maximum building height, but also because of acoustics, the hall is partly built underground according to the principle of ‘box in box’.

In the search for the most perfect acoustic form, the design evolved into a shell-shaped hall, which also creates a sense of security. The pronounced shell shape of the hall is immediately noticeable in the surrounding areas of entrance hall, reception, bar, cafeteria and foyer.

The centrally located culture café provides a link between the cultural events and the new communal library, which is also part of the building programme of this cultural centre.

In addition to the theatre, the programme also includes a multipurpose ballroom (capacity 350 persons), a dance hall/ballet room (capacity 150 persons), artists’ dressing rooms, catering, etc. The theatre itself is equipped with a fully-fledged fly tower, stage storage and workshops and a mobile orchestra pit (lift) for an orchestra of around 30 musicians.

The underlying philosophy of the overall design is part of the theme of sustainable architecture: the economical use of energy and the development of new ideas that produce an honest result using minimal resources.

Next to the cultural centre, a car park for 82 cars was planned above the ground, as there was sufficient parking capacity in the immediate neighbourhood of the site (Willem Lambertstraat + Bibliotheekplein). However, the design took into account the possibility of building an underground parking garage in two underground layers at a later stage, with a total capacity for 143 cars, with a direct connection to the underground layer on level -1 of the cultural centre, where the entrance to the multifunctional party room is also located.

In 2018, ‘CC De Factorij’ received the Publica Award and Archiles architecten (in partnership with ebtca architecten) was nominated for the German Design Award 2019 and the Architzer A+ Award 2018 for this project.